Soils of the Okanagan Part I 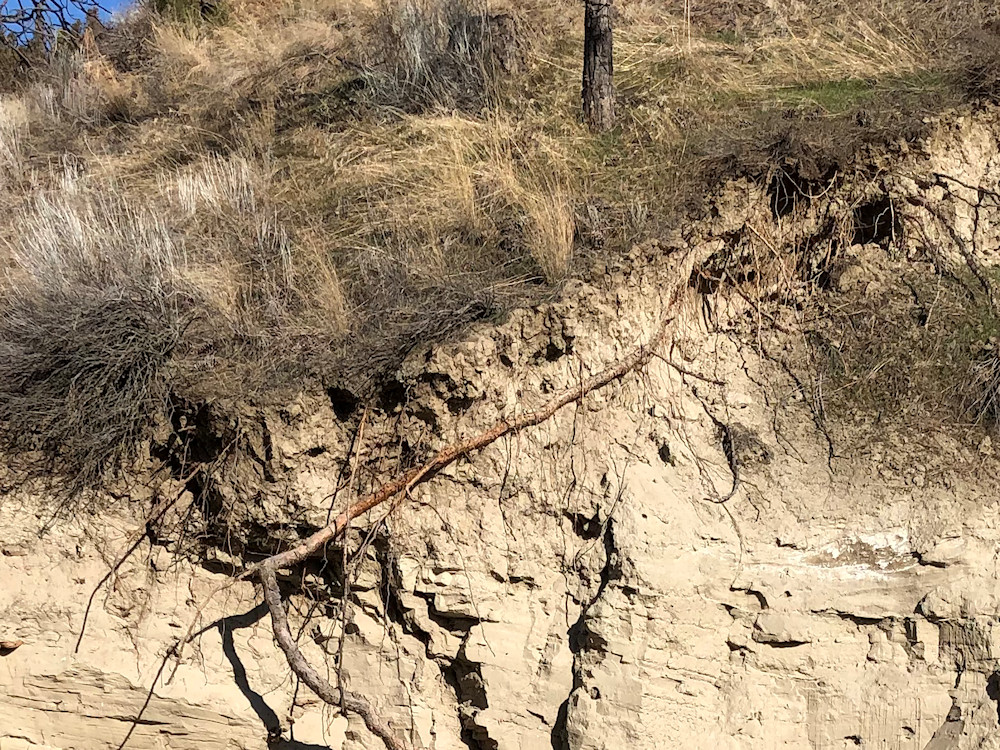 A good understanding of your soil is one of the keys to successful gardening especially if you are trying to follow xeriscape principles. In this first article I will provide some general information about soils in the Okanagan. In the second I will suggest some methods for evaluating your own particular soil.

Anywhere you live in the Okanagan, a good part of your soil likely comes from the last major glacial episode that occupied the valley. From 30,000 to 13,000 years ago this valley was filled up with ice to a level at or above the tallest mountains that surround us. That ice sheet slowly melted leaving behind all the boulders, gravels, sands and rock flour (silt) that form the sediments in the valley. The soil may have been reworked and moved around since that time, but it originated from that Fraser Glaciation episode.

One of the most interesting features of the Okanagan from a soil point is the presence of a series of benches that rim the present-day system of lakes including Kalamalka, Wood, Okanagan, and Skaha. These benches attest to the presence of a significantly larger lake (Lake Penticton) that filled this valley to a level about 115 m above the current lake level about 10,000 years ago. The lake extended down to the Okanagan Falls, Vaseux Lake area. Here the valley narrows and was filled up with a dam of ice and glacial debris for an extended period. It is quite likely that the dam was periodically broken and reformed depending on the vagaries of ice movement.

The distribution of soils in the Okanagan can be understood in a general way by looking at surficial geology maps. There is an excellent one from the Geological Survey of Canada for the greater Kelowna area and one for the Vernon area. 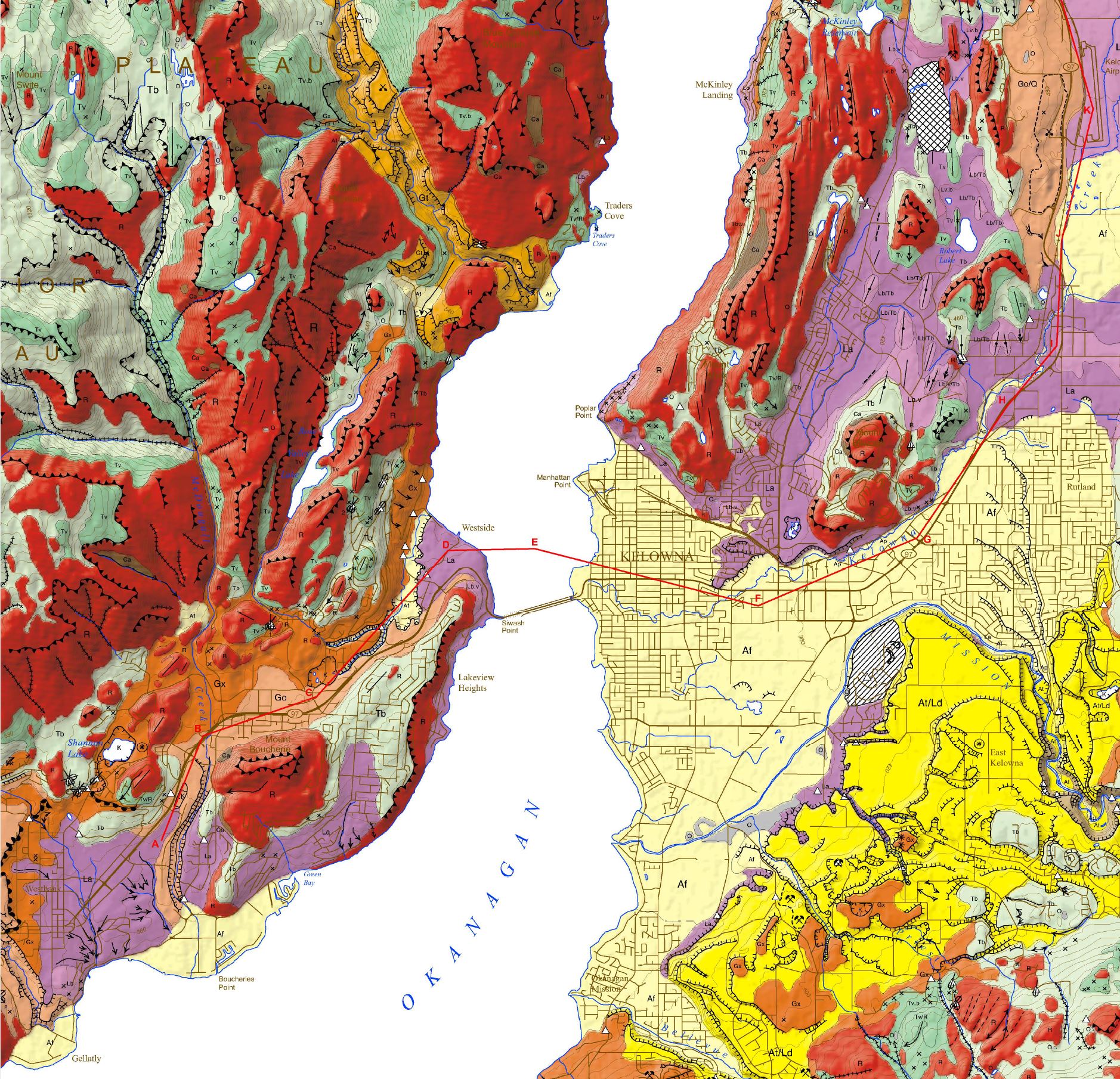 To get a sense of what these maps mean we can look in detail at the Kelowna area example. The areas coloured red are the rock outcrops of the surrounding hills and mountains. The green areas are generally mixed glacial till often derived directly from the local rocks. The light-yellow area is a broad flood plain formed by creeks and rivers flowing from the north and east down the valley. These were much larger than the current Mill Creek, Mission Creek etc. and they have reworked and redistributed the glacial sediments. In some parts of the light-yellow area there are patches of organic rich soils from swamp type environments, but these are relatively rare.

The purple areas on the map show the Lake Penticton bench sediments. These are the same sediments that form the light grey bluffs of fine sand and silt on the west side of the Bennett Bridge and also the prominent bluffs further south in the Summerland and Naramata areas. These benches are the source of some of the most consistent soils in our area and home to extensive vineyards and orchards. These Lake Penticton bench sediments are dominantly fine sand and silt but contain some pockets of coarser sand and clay.

While these surficial geology maps give a good general picture of the types of sediment on the surface there is a much more detailed soil map dataset available on the web. The data come from a major soil mapping project completed in 1986 titled “Soils of the Okanagan and Similkameen Valleys”. This mapping is oriented principally towards agriculture, but it can be quite useful to gardeners and there is other environmental data there like frost free days.

There are a few things to keep in mind about the government soil mapping:

To see how to use this soil mapping data go to:

and type your postal code into the search box on the top left-hand side. The map will zoom to your area and then you can click inside the yellow polygon that covers your garden. A text box comes up.

Here is what you will see in the text box if you were to check our UnH2O garden location: 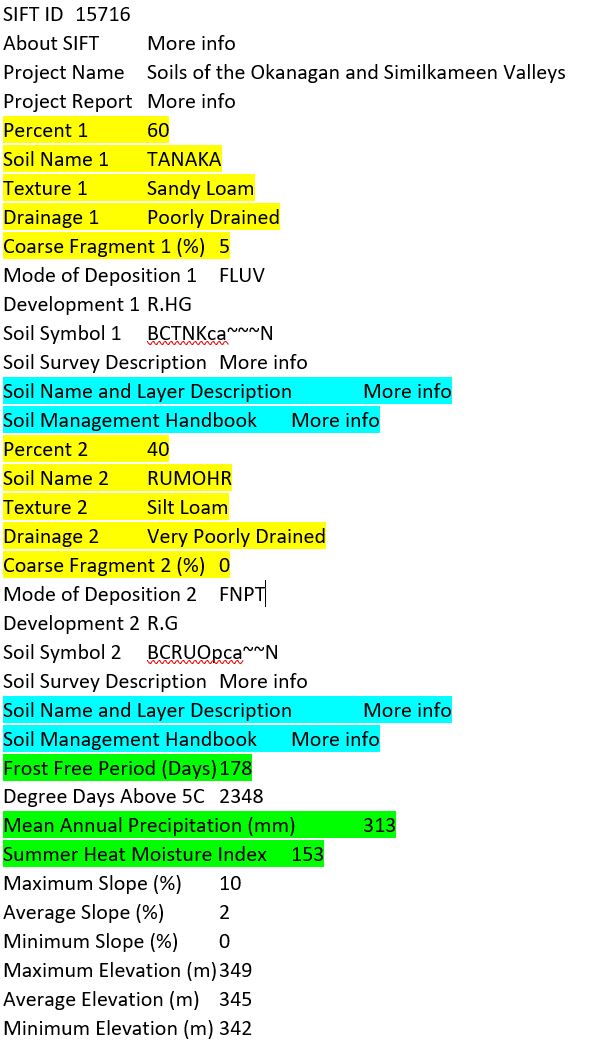 The area in and around the UnH2O garden contains a mix of 60% “Tanaka” type soils and 40% “Rumohr” type soils. The part highlighted in yellow is some basic soil information for those types of soils. The blue highlights are links that provide more detail on the soil types and how they can be used in agriculture. The sections highlighted in green are useful environmental information. It is interesting to compare the 3 environmental estimates with data from a similar polygon in near Vernon and one near Osoyoos.

If you take the time to cruise through the soil descriptions in the valley you quickly realize that there is really an exceptionally large variation. Soils are generally silty or sandy but there are some areas of heavy clay. Soils are usually alkaline and low in organic material but there are some acidic, high organic soils often located in lower areas. Soils are generally well drained but again in the lower areas there is some very poor drainage.

Once you have done what you can to determine the likely soil textures and drainage for your area you can move on to some specific tests for your garden in Part II of this blog. The general description from the mapping is probably accurate for your subsoil and is a good starting point for what was originally in your garden.

Take the time to get to know where your soil came from. You may have brought the top few inches from somewhere else but what is below greatly effects your trees and shrubs. 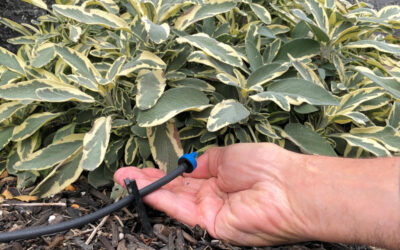 A well maintained drip irrigation system is the most effective way of watering plants in the Okanagan. It distributes water directly to the root zone with the minimum evaporation waste.

END_OF_DOCUMENT_TOKEN_TO_BE_REPLACED 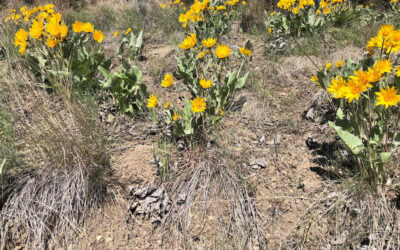 Soils of the Okanagan Part II